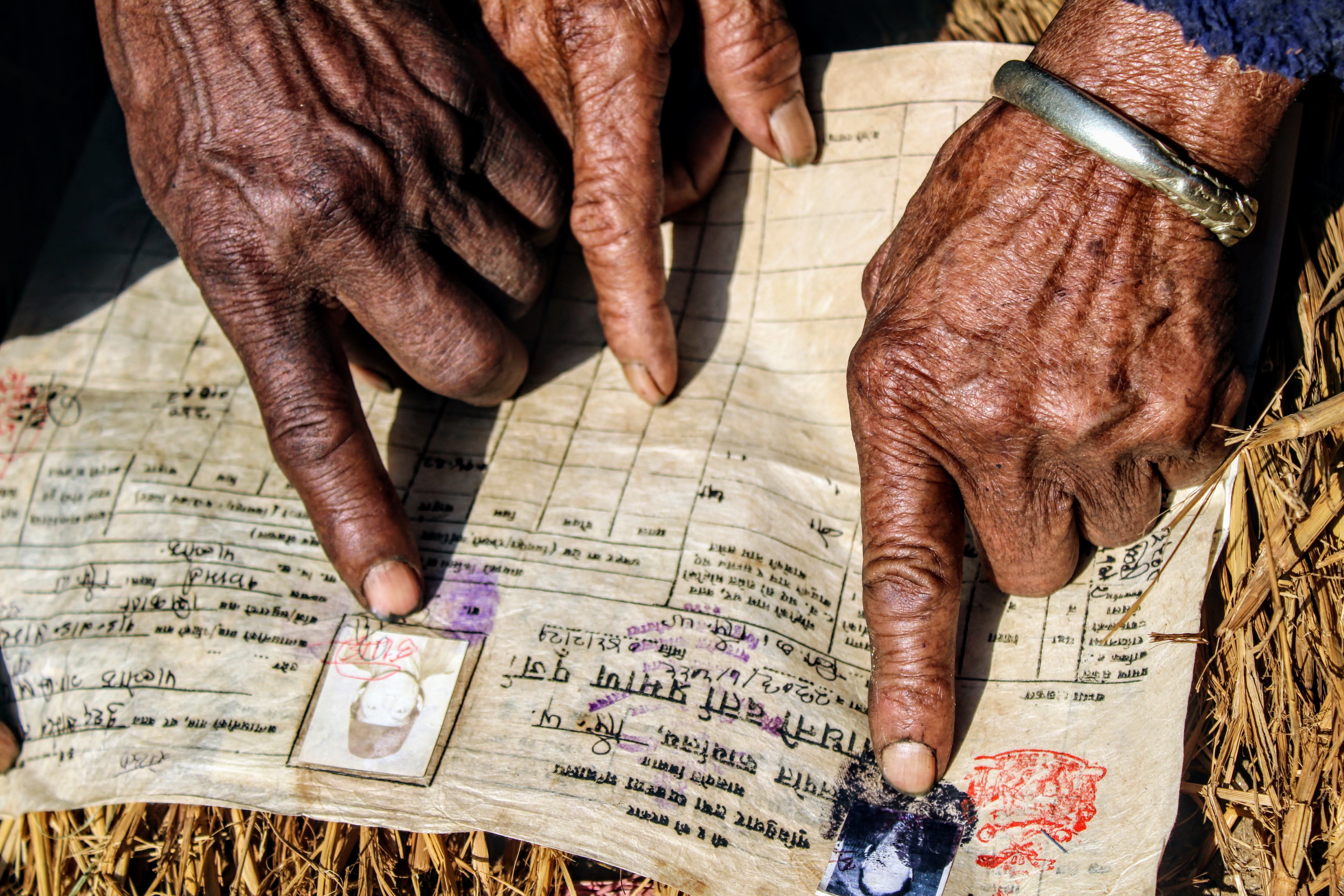 Maya Devi Lama, 33, of Melamchi municipality ward no-06 of Sindhupalchok district got marriage with Dendu Lama of same place in 16 years ago. Like other women she had also the responsibilities of cultivating farms. However, the land which she used to culitivate was not registerd in her name. She tried to register the land which was purchased by her family members after her marriage but she failed. The family members convienced her as saying she had also equal rights over the land which belongs to them. In this situation, a team of CSRC met her family members and convineced them for the acquisition of Joint Land Ownership (JLO). Mayadevi and her husband Dendu came to the JLO enacampment organized by CSRC. Finally, they received JLO certificate from government officials. After receiving of JLO certificate Dendu said, “When I talked with CSRC team I felt that my wife has also equal rights over land that belong to me. Thus, we acquired JLO. We both are happy at the moment”.

In the same way, Sanomaiya Tamang, 38, of Melamchi municipality-06 of Sindhupalchok district got marriage at the age of 19. According to her, in the initial days, it was very to difficult to accept that she has equal rights over properties that belonged to her husband. Initially, she thought she would not stay in her husband’s home for long. After 19 years of her marriage, she acquired JLO certificate from JLO encampement organized by CSRC. When she received JLO certificate from the government officials she felt that her husband’s properties including land also belong to her. “Now I can not leave my husband I have equal rights over land and other properties,” Sanomaya smiled.

Chameli Tamang, 33, of Melamchi municipality ward-06 of Sindhupalchok district is well known as a frontline leader in the same municipality. She facilitated for the acquisition of JLO certificate for 25 couples in the same place. But she did not have JLO certificate as her husband was outside of country. When her husband came back to home in 2017 she convinced him for the acquisition of JLO certificate. Finally, they acquired JLO certificate. “Women protect land, they produce crops and crons but they are feeling the land is not of their own. Such unjust and unequal distribution of resources deprive of getting equal ownership over land. Therefore, I am working for having equal rights of men and women over land,” said Chameli.

Harimai Lamichhane of Helambu rural municipality-04 of Sindhupalchok district got marriage at the age of 10. Currently, she is 46. After 25 years of marriage, she received citizenship from my husband’s name. This added his husband’s surname to her name, but for the property, she did not know on how would come this early. Lamichhane shared “We had a huge joint family. Slowly, everybody started living independently. We also separated. This put a load of farm duties on me. While other works were led by my husband. Despite this, a feeling of being deprived of the ownership distressed me. We discussed this topic in our women’s group meetings. A JLO discussion was organized in our own women’s hall. 9 of our members submitted our ownership certificate. Finally, Harimai and Lilanath acquired JLO The day the revenue officer handed over the ownership certificate and announced me the legal owner of the land is one of the most unforgettable moments of my life.”

Hari Prasad Chapagain of Helambu rural municipality ward no-7 of Sindhupalchok district had been cultivating 0.40 hectare of Guhti land for generations. District Land Rights Forum facilitated to provide half portion of land from tenancy rights to his family. He said, “I never imagined that I would have 2.70 hectare area of land.” The land which his family received from tenancy rights was registered in the name of Hari Prasad. Her wife Pabitra Devi said, “although my family received half portion of land from Guthi it did not impact my life because I did not have the ownership of land”. However, I could not talk with my family members to register the land in my name. When a team of CSRC came to my house and asked us for the acquisition of Joint Land Ownership certificate my husband was ready to do so. “Now I am happy because I have also equal rights of rights. I will produce many things by using the land acquired from tenancy rights, Parbati smiled.“

The ward chairperson of Helambu rural municipality ward no-07 Khetnath Ghimire and his wife Sanumaiya Ghimire Ghimire also acquired JLO in the same rual municipality. Mr. Ghimire has planned to organize a JLO campaign in his ward. He said, “all women of my ward will have their ownership over land. I am planning to organize a JLO campaign in my ward.” When he received JLO certificate from district land revenue office the people of his ward are interested for the acquisition of JLO in the village.

Out of 5 thousand 2 hundred 27 devastated HHs of Helambu rural municipality 3 thousand and 95 HHs were already constructed at the end of 2018. Of them, 4 hundred and 31 HHs were constructed with the financial support of HELVETAS Swiss Inter Cooperation Nepal. In the same way, out of 13 thousand 21 hundred and 25 devastated HHs of Melamchi municipality, 7 thousand 9 hundred and 6 hundred HHs were constructed. HELVETAS Swiss Inter Cooperatiion Nepal assistated for the construction of 306 HHs in the same municipality. CSRC has been implementation Rehabilitation of Facilities of Earthquake Affected People (REAP) project in Melamchi municipality and Helambu rural municipality. The women’s ownership over newly constructed HHs is very low. Through this project CSRC is facilitating for JLO campaign for these newly constructed houses. The local governments are also supporting the campaign.