House reconstruction has entailed tremendous efforts on the part of both husbands and wives, but when it comes to claiming legal ownership over the property, the wife’s share in this work is often forgotten. Traditionally, land and property are inherited from father to son(s) in a patrilineal system that leaves wives and daughters with no legal share. This puts women in a very vulnerable position in the case of widowhood, divorce, or a husband taking a second wife (an illegal but nevertheless common practice). It also means that women have no collateral against taking loans and are thus often denied credit. Only about 5% of land in Nepal is owned by women.

In 2011, the government of Nepal introduced a policy of Joint land Ownership (JLO). This provides an easy mechanism for husbands and wives to register their land in both their names, paying a mere Rs 100 (less than USD 1) as a registration fee to the land revenue office. However, the policy was not widely adopted – in part because of limited public awareness of its provisions, and in part because men did not see it as being in their interest.

Helvetas and its local partner Community Self Reliance Centre (CSRC) have been supporting couples to register their house and land jointly, under the JLO scheme. There are now 523 households in Melamchi municipality and Helambu rural municipality that have registered JLO – covering some 333.94 hectares in total.

Hesitant husbands
It takes good arguments to persuade a man that everyone would be better off if his wife’s name was on the family land deeds as well as his own. Helvetas and CSRC have sought to portray households with JLO as being strengthened. Husbands can feel proud that, whatever happens to them, they have ensured the future of their wives and children to the best of their ability. Meanwhile, wives clearly have a legal security over the household assets that they never enjoyed in the past – despite generally undertaking the bulk of the farm and domestic labor. According to Thala Pasad Dangal, who has a JLO certificate with his wife Goma Dangal (both are featured, with their grandson, in the header photograph):

Goma Dangal, who is quoted in the title, stressed the issue of equal rights; for her this is an important principle to have established. 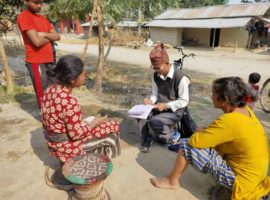