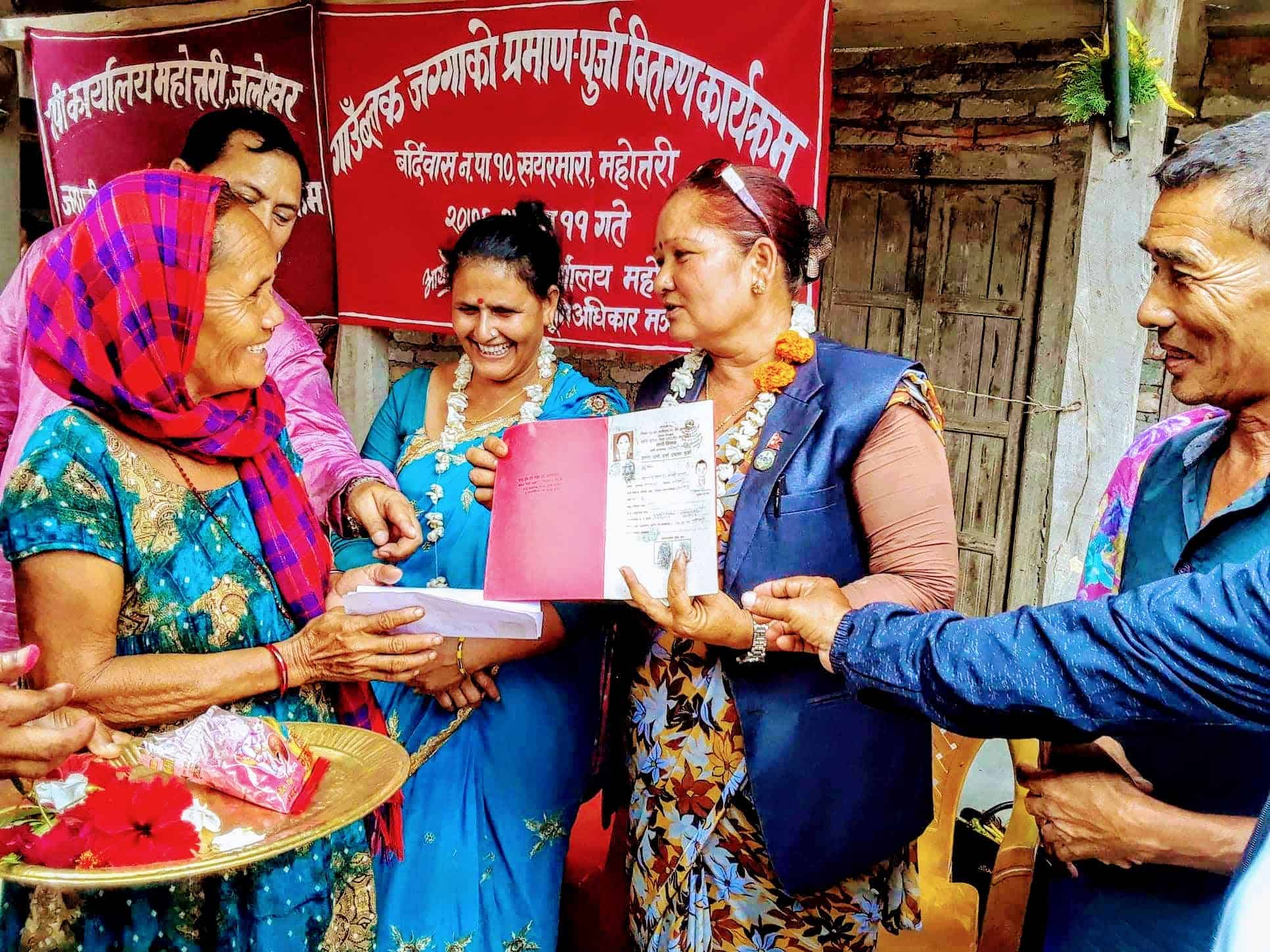 In and around 1990, Nepal government conducted land survey in various part of the country. Survey team also went to Khayarmara area of Bardibas Municipality in Mahottari District. The team carried out a wholesome survey of the village. In this way, 64 households of Khayarmara village became a ‘village block’ residents.

One of those 64 households is Bir Singh Thing. He says, “We lived in this land for many years, cultivated here and produced food but we never had ownership. We informed government agencies including District Revenue Office several times and requested to provide certificates to us. Our voice was never heard and responded. We got nothing.” Bir Singh’s statement expresses a functional hardship commonly experienced by his fellow households due to lack of land certificate.

Sometime in 2010, DLRF members including Phauda Singh Syanba and Raj Kumar Basnet arrived in the village and initiated the formation of a VLRF so that villagers were organized to claim their rights collectively. VLRF started to organize and educate villagers for and about their rights. It organized various campaign activities too to claim their rights. Sukaman Moktan, a resident of Khayarmara, says, “We organized and participated in several rallies, protests, sit-ins and chanted slogans to demand land certificate in our own name.”

Their struggle continued for nine years. Many vicissitudes were experienced. The local election was held to at all levels. During the local level election, when candidates came to their houses asking to vote for them, community people asked political leaders to provide written commitment that they will be provided with land certificate after the election. All the candidates expressed their commitment to provide land. After the election, VLRF members also organized mass protest to exert pressure for the implementation of their commitments. Finally, the local government dispatched a letter to survey office and land revenue office of Mahottari and urged to conduct land survey so that they can provide land certificate to each household. Binod Karna, one of the members of VLRF says, “Land certificate was provided to us based on the use of land at the moment. I also obtained joint land certificate with my wife.”

Out of 64 households, 15 obtained joint land ownership with their wives and rest of them obtained joint land ownership with their family members. CSRC together with DLRF supported VLRF members to claim their rights over land through mass mobilization and policy advocacy. Binod again says, “One of my sons is studying Bachelor of Medicine and I have taken loan from a bank by submitting the land certificate. If I did not have land certificate I would take loan from individuals in very high interest rate.”