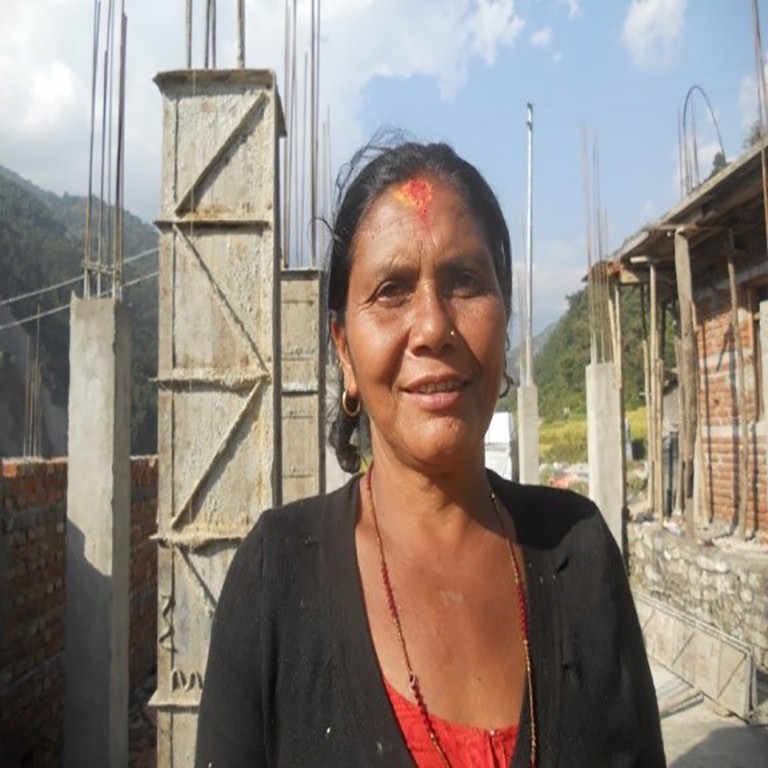 Januka Thapa Magar, 41 is a permanent resident of Uttargaya Rural Municipality ward no 4, Pairebesi. Born in neighboring district Nuwakot, She was married in a small age due to her family impoverished status. Although, Magar has a huge family of 9 members her limited land only produces food enough to her family for 6 months. The downpour followed by the devastating landslide on 6th August 2017 resulted in Magar and 71 families of Pairebesi becoming displaced from their ancestral land.

Januka shares “The 6 ropani[i] (i.e.0.3 ha) of land in Pairebesi is all we have in name of the property. As we say, the disaster only struck the poor; the 2015 earthquake totally damaged my house. Our savings were used for the reconstruction of the house. The irony, we even had not finished paying off the loan our house again got swept away by the landslide of 2017. The earthquake only destroyed our home but the landslide took away our livelihood as well.”

The landslide affected seventy-one families of Pairebesi compelling them to move to Naubise for their livelihood and safety. Januka adds “All our savings were used up in the reconstruction. Due to the debris of landslide farming was also obstructed for a few months. My husband wages were the only source of income during this ordeal. At this period only District Land Rights Forum (DLRF) and Community Self Reliance Centre (CSRC) were collecting data of displaced families. We participated in their interaction programme. All the 71 families got enrolled in the displaced name list. We were eligible to receive the 2 lakh[ii] (i.e. two hundred thousand) cash grant for buying land from National Reconstruction Authority (NRA). We discussed for an integrated approach in our community. 16 houses agreed and bought land for making an integrated settlement. This time my name was also present in the land ownership certificate. CSRC not only support for buying the land but ensured my ownership over the land as well.”

Currently, Januka and the 16 families have bought 64 Aana[iii] (i.e. 0.2 ha) of land and completed the construction of their new houses. Januka shares “Our new settlement is only 30 minutes from Pairebesi. Farming and other works have been eased. The devastation created by the landslide always haunted me. But, CSRC helped turned a landslide victim into a landowner. This is my new identity thanks to the joint land ownership certificate. I cannot describe the feeling of being able to live in a safe house.”